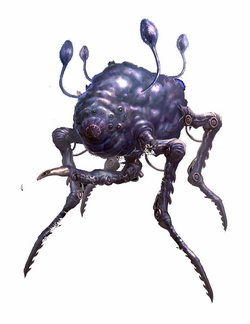 Pathfinder
Deh-nolos are a species that serves the Dominion of the Black as inventors and engineers. They are responsible for the creation of many Dominion technologies and servitor races, and harvest the brains of other creatures in order to gain even more knowledge.

Deh-nolos are vaguely resemble enormous purple spiders, with four long, spindly legs extending straight below its boneless, ovoid body. A fifth limb, serving as an arm, extends from their "chest." Their front end bears a lamprey-like mouth and numerous small eyes, and blister-like glands across their bodies contain a potent poison called dominion bile. Deh-nolos place captured brains in one of four bulbs on the end of long tendrils extending from their backs. Deh-nolos average 20 feet tall and 2,000 pounds in weight.

While mostly organic, deh-nolos have cybernetic components, generally located along their five limbs. They also secrete a metallic ooze, which they can form into metal crystals usable as projectile weapons or components for their inventions. They may also be innately magical in some respect, as they are resistant to damage from non-magical effects.

Like other brain-harvesting Dominion creatures, deh-nolos are probably carnivorous. They do not eat the brains they harvest, though, instead using them as sources of information and power sources for their magic.

Deh-nolos are fearsome spellcasters. Much like their engineering skills, these spells focus on controlling and modifying technology, biology, or both, although they are also capable of opening portals. However, they rely on captive brains to use their magic; without a full complement of four brains, their spells and physiology both weaken, and without any brains they cannot cast spells at all. They are also able to charge their metallic crystals with arcane energy from the brains as a weapon, although they can also fill the crystals with dominion bile. These crystals are fired from beneath the skin, and launching them harms deh-nolos. Finally, deh-nolos possess psychic abilities, allowing them to fly and communicate telepathically.

Deh-nolos have access to all forms of Dominion technology, and are responsible for creating the great majority of it. Most notably, they designed both the Dominion's spacecraft and the shipminds that pilot them.

Retrieved from "https://aliens.fandom.com/wiki/Deh-nolo?oldid=185597"
Community content is available under CC-BY-SA unless otherwise noted.