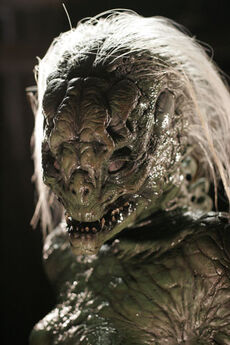 A Decoy is a reptiloid creature. Originating from an ice planet located in or around the Belt of Orion, the Decoys - whose real name was never elaborated upon - left their homeworld intent on recolonizing Earth.

From what little was revealed of their planet's population, their gene pool has shrunk so rapidly that all males of the race have died out. The exact cause for this deficiency was never explicitly stated, although it is possible that a defect in their evolution may have occurred.

Decoys are reptilian in their true form, with slimy scales and spikes growing from their spines. While mating, they expel tentacles from their navels, which is located between their breasts, which then enter the male via the mouth to incubate and release the eggs. It is unknown what process the human male's body endures while "pregnant" with the Decoy's offspring, although a successful offspring is half-human, suggesting that the eggs take genetic material from their male hosts during gestation. Unfortunately, the mating process causes the area around the partners as well as the internal body temperature of the human to drop to sub-zero. Causing external and internal freezing, which can prove fatal to humans.

In human form, Decoys generally take on an appearance that fits the feminine ideal of most male adolescence. The one commodity in their human appearance is that their hair is always blonde, with only one exception. Their only physical differentiation when compared to humans is a lack of a navel, as their species does not require umbilical cords to give birth.

Infant Decoys appear as a crustacean creature. During the birthing process, the offspring crawls out of the father's mouth after a 3 day gestation period. This, however, is not the case in Decoys 2: Second Seduction, in which case a full human-Decoy hybrid appears as a large, aggressive, worm-like creature with glowing red eyes, tentacles and a full set of fangs.

Due to the cryogenic conditions in which their species evolved as well as their overall genetic makeup as reptiloids, the Decoys did exhibit several inhuman characteristics ranging from overt mutations while in their native form to subtle enhancements while in their human guises. In general, Decoys are shown to be noticeably stronger as well as considerably more lithe than humans while in their native form. It isn't shown whether human skin limits their power, but they are shown to be able to rip and toss a metal door off its hinges with their bare hands.

Although no examples of extraterrestrial technology were demonstrated in the films, it is alluded to that - being an intelligent breed capable of interplanetary traversal - that they possess technology that is at least more sophisticated than what is currently available on Earth.

Retrieved from "https://aliens.fandom.com/wiki/Decoy?oldid=173792"
Community content is available under CC-BY-SA unless otherwise noted.