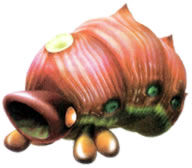 Pikmin
The Decorated Cannon Beetle is a species of specialized Lithopod found during returning expeditions onto PNF-404 by Captain Olimar. Adult forms of this species had so far never been discovered, only larval forms being studied as of current.

Adult forms had never been discovered, so it's impossible to truly speculate what adults look like. Juvenile Decorated Cannon Beetles hold a similar look to most juvenile Lithopods, with their red coloration associated with their diet of iron ore.

Despite no adult specimens, there is some interesting differences between this variant and other species:

Retrieved from "https://aliens.fandom.com/wiki/Decorated_Cannon_Beetle?oldid=150683"
Community content is available under CC-BY-SA unless otherwise noted.