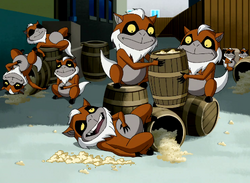 These creatures are show as toddler-size humanoid rodents with red/brown fur with dark pink bellies, muzzle and white hair around their heads along with yellow eyes. They somewhat between that of a rabbit and goat.

If any member of this species is ever fed meat, they will turn into giant mindless monsters that will eat everything in their path. According to Orb, if they keep eating they will multiply into several monsters that consume a whole entire planet.

Retrieved from "https://aliens.fandom.com/wiki/Decka%27s_Species?oldid=142015"
Community content is available under CC-BY-SA unless otherwise noted.