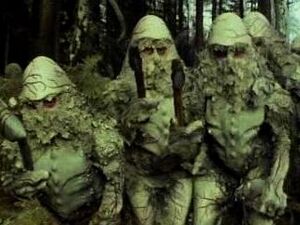 Terry Nation
The Decimas are a species of genetically-engineered life forms created by a colony of Auronar outcasts on an unnamed planet, to serve as cheap and efficient menial labor. They were originally engineered as a "four function animal", then increased to "ten functions", hence the name "Decimas".

Decimas are relatively short bipeds with green skin and a texture that resembles vegetation, allowing them to somewhat blend in with the forest. They have tridactyl hands and surprisingly Human-like eyes, even though the rest of their bodies more closely resembles some kind of reptile or amphibian. They produce high-pitched vocalizations and appear to be semi-sapient.

Intended to be purely practical workers, the Decimas originally showed no hostility, but were deemed a failure since, due to a genetic mutation, they started to exhibit what has been described as "primitive emotions" and turned against their masters.

Decimas live in groups of up to fifty individuals in the forests of their homeworld, and have the means to create simple forms of technology, such as spears and hatchets. They're intellectually crude, according to their creators, but have been observed to be social creatures. When one of them dies, the others will respectfully remove the body, possibly to perform funeral rites.

Retrieved from "https://aliens.fandom.com/wiki/Decima?oldid=175973"
Community content is available under CC-BY-SA unless otherwise noted.