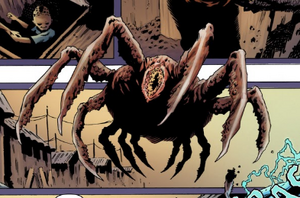 The Deathspiders are an invasive species of giant insectoids.

The Deathspiders possess various specialized forms. Some, which resemble a cross between giant crabs and arachnids, are specialized for attack; while others resemble oversized termites that lay eggs, with winged carriers that spread out the eggs. Similar to ants, they are eusocial, and reproduce by parthenogenesis, using dead prey to incubate eggs.

They are ravenous creatures capable of devouring all biomater on a planet within a few years. However they are susceptible to electricity.

Veronica Falcon of the Department of Planetary Defense surmises that the Deathspiders may have been responsible for the loss of life on Mars due to the hematite concretions found on the desolate planet matching exactly like those the creatures produce.

Around 900 years ago, the planet Phaedon faced an infestation of the Deathspiders after a Phaedon pilot transported a mysterious cargo. The creatures were unable to devour the Phaedons, but consumed the biosphere of life, leading the Phaedon to infighting after they wiped out the invaders.

A pair of aliens delivered a load of cargo passing through the Sol System, before it abruptly disengaged from the ship, destroying it on collision before heading towards Earth. Two UFOs containing a myriad of lifeforms crashlanded on Earth: one in Washington D.C. and another in Bloedriver, Africa.

Later investigation revealed that the containers carrying the Deathspiders were an ark of some sort, which later transmitted a message to space contacting the 'proper authorities'.

The Last Phaedon believed that someone was manipulating the deliveries of these creatures to viable planets, but for what purpose he could not fathom.

The Deathspider infestation was halted thanks to the efforts of the Last Phaedon, who created a giant Tesla Coil that engulfed the planet, electrocuting the creatures.

Retrieved from "https://aliens.fandom.com/wiki/Deathspider?oldid=165080"
Community content is available under CC-BY-SA unless otherwise noted.