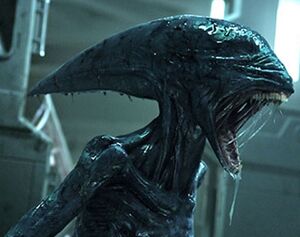 The Deacon just after birth.

Alien
The Deacon; also known as a "Proto-Xenomorph"; is a bipedal parasitoid alien and a preliminary type of Xenomorph. It bears many resemblances to the Xenomorph; however, it possesses more Human-like teeth and has an erect bipedal posture and no tail. Its head shape is also unlike that of Xenomorphs, and it seems to emerge from its host using its pointed skull, as opposed to simply biting or clawing its way through the ribcage.

It should be noted that the Deacon is not the same species of Xenomorph encountered on LV-426; but rather a more primordial variant. LV-223; a moon of the gas giant Calpamos in the Zeta Reticuli System; was the location of a facility housing prototypes of the Black Liquid that would later bring life to this primitive form of Xenomorph.

The Deacon's anatomy has many similar features to the Xenomorph, but is very distinct in comparison. Like the Xenomorphs, it is bipedal with an elongated skull, but it lacks a tail and has no mouth-like tongue. Instead, it has a more primitive jaw mechanism akin to a goblin shark. Its skin resembles that of the Xenomorph with an insectoid or reptilian appearance, although the Deacon has a distinct blue tone whereas the others generally have a significantly darker tone with very little color.

The Deacon appears to be a unique creature, though it might conceivably be regarded as the first of a new species. It developed as an endoparasitoid inside an Engineer host and was implanted inside this host by a creature known as the Trilobite. The Trilobite, in turn, gestated as an abnormal fetus within Elizabeth Shaw's womb, where it grew with frightening speed. It originated after Shaw's lover, Charlie Holloway, was infected by the Black Liquid, and passed the mutated Trilobite sperm to Shaw. It was removed via cesarean before it had fully grown and developed, yet it survived this procedure after Shaw left the area. She later returned to witness that, although she had removed the creature from her body, it had grown immensely in size.

The fully-grown Trilobite had multiple tentacle-like appendages and skin that resembled that of a Xenomorph's facehugger. The Trilobite soon injected the Engineer with a tube-like organ that implanted an embryo through the Engineer's mouth. This behavior is similar to that of a facehugger. The Trilobite even died after injection, much like a facehugger, indicating that the two are very likely related, though it has not been confirmed that this is so. After a short while, the Deacon was born, bursting out of the Engineer's body from his chest and abdomen, using its head to puncture and force its way out. This contrasts greatly to the Xenomorph's method of birth, which is to burst out of the host's chest as a larva and undergo metamorphosis to become an adult. The Deacon appears to come out almost fully formed, although an adult Deacon has not been seen, so this is still speculative. It's not impossible to imagine that the adult Deacon might be as different from a typical Xenomorph as the adult Trilobite differs from a facehugger. 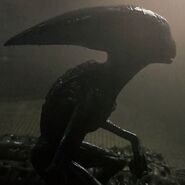