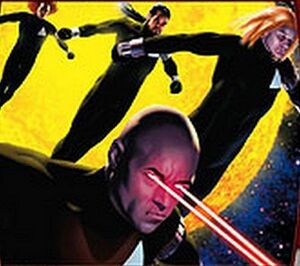 Descended from the Kryptonians who bred with Ogigi

The same as the Kryptonians

DC Comics
Daxamites are a humanoid race hailing from the planet Daxam. They are descended from Kryptonian settlers who interbred with the prehistoric Daxam natives, as such, they are the cousins of the Kryptonians and posses the same powers and abilities under a yellow sun. They were renowned for their biochemical research. They are fatally hyper-allergic to lead, though by the 31st century, they will have found a cure, enabling them to become renowned space explorers.

It is believed that the Daxamites are descendants of a large separatist group of Kryptonians that left Krypton to live in another world in the first mission to colonize a dwarf red star, a thousand years before the end of Krypton.

The beginning of the Kryptonian era when an alien race visited Krypton in prehistory, led by Bertron scientist, he and his team were responsible for creating the monster "Doomsday" that eliminated all the aliens, using one of their ships to leave Krypton to space, the rest of these ships were used by the primitive Kryptonians, giving the beginning the technological evolution in Krypton.

Bertron created the dimensional wormhole in the Kryptonian space to attract other species as a trap to Krypton, to increase the force and mass of the monster, this also attracted the alien projector of the Erradicador, coming from the other side of the galaxy, until falling in Krypton, increasing plus Kryptonian technology.

500 years later, Krypton was already mastering its technologies, initiating galactic exploration to other planets for 100 years. With the invasion of a hostile alien race called Vrangs, Krypton surrendered to them, where the Kryptonians became slaves for 5 years, commander Val-OR led a warring troop succeeding in ending slavery in Krypton by expelling all Vrangs, sacrificing his own life, his body was buried under his monument, beginning the foundation of the city of Kandor, after this event, the individual government of Krypton changed to a single government, which commanded the whole planet, the high council.

During the war of political power between the cities Xan and Erkol, in the dispute to govern Krypton, the individual government fell in the war. 20 years after the end of the war, Kandor became the world capital of Krypton, replacing Erkol City, which had been destroyed for years to be restructured for 10 years, the nuclear bomb damaged the planet's core, the atmosphere began to become rarefied to the Kryptonians, scientists began to build domes to envoy cities and preserve life in them, Krypton became a tempestuous planet outside the domes, Jerat City was abandoned for becoming a forbidden zone of the beginning of the radiation of the kryptonite in the near sector the city.

On a visit to Krypton, the Missionary of the Worlds, the Clergy, was in the reconstruction of the city of Erkol, when he sabotaged security with his disciples to steal the Eradicator in support of the disciple Kem-L (where all disciples of the Clergy, changed surnames to obtain the celestial divinity), Clergy and his disciples in his star ship leave Krypton, but the group of disciples began to die inside the starship ship due to the genetic alteration, that fatalized the kryptonians to the death, caused by the chemical bomb of Erkol, Kem-L manages to survive, where the Clergy places Kem-L still alive in his small escape ship returning to Krypton, Kem-L was reinstated by the doctors and announcing the condemnation of all Kryptonians to be isolated within Krypton in life eternally imprisoned. This caused an uproar to all the Kryptonians to be isolated avoiding the outer worlds, carrying the punishment of the post war in the blood, and the past of galactic exploration was erased, evolving the technology only inside Krypton.

The high council (new power collective of Krypton, born from Kandor) ordered the decommissioning of the Kryptonian exploratory ships and their withdrawal from service, all of them returning to Krypton, minus one, of Captain Dax-AM, who did not agree with the new Krypton government, avoiding to condemn its crew to an eternal prison within the planet, deciding to stay in a new world, Dax-AM baptized the planet in his name as Daxam and the red dwarf sun of Valor in honor of his starship and name of the hero kryptonian, 800 Kryptonian immigrants living in a new world. In course of time, the Kryptonian found an isolated tribe indigenous "Ogigi" to the outside world living in caves as xenophobics and religious, disciples of your god Sard, avoiding  the lead contamination in the few places on planet, with time, there was the unification between Kryptonian and the indigenous tribe, began a new race admixture, the daxamites. The Kryptonian customs were erased by the descendants to start a new daxamite idealism. 300 years after the formation daxamite complete, the scientists of Daxam excluded all lead poisoning material in Planet, further magnifying the lives of residents of the planet. Through the ages, the daxamites founded a new religious and xenophobic order known as "White Triangle" avoiding contact with other planets, The White Triangle has created government laws with strict orders severe to daxamites. The heritage of daxamites have the same powers of Kryptonian and the weakness of his former indigenous ancestors by lead, however! the daxamites are not affected by the deadly Kryptonite, but the healing anti-kryptonite (piece of Argo City) decreases the lead poisoning. Three thousand years after the Kryptonian colonization, after the mixing of indigenous xenophobic, Daxam is considered as an isolated planet in its sector in space, gradually the xenophobic prejudice that ending the doctrines of Sodam Yat and Mon-El as the legendary free will daxamite the population, and some get to know the outside world, even risking their lives for the benefit of a dream for the beginning of the change of other daxamites generations.

Despite forgetting to Krypton customs, Daxamites retain the religious customs of their indigenous descendants, worshipping God "Sard" positioning the xenophobic laws on the planet.

In the 31st century, with the formation of the Legion of super heroes, the new daxamite government banned the xenophobia of times past after the cure of lead poisoning by Brainiac 5, the daxamites joined the galactic federation of the Legion, where some daxamite members help the Brainiac 5 team, which saved thousands of daxamites from lead poisoning, rebuilding spacecraft for the new space journey, this caused a new era in Daxam, unifying the other aliens from other planets and colonizing other planets under the banner of Daxam.

Members daxamites in the comics.

Zax-Vane: the first rebel to leave Daxam to go krypton, gave the story to the high council of Krypton, and the first daxamite immigration history on Krypton, 300 years before the end of Krypton.

Lar-Gand, (Mon-EL): the second rebel is against xenophobia daxamite, when he found the Kal-EL teenager, the Kryptonian survivor on earth, was exposed to lead, Kal-El saves his life flipping straight to Phantom Zone, who was jailed for 12 years. During Visit the Legion to Superman, Mon-El is free of prison Phantom Zone, won a lead poisoning healing through Brainiac 5 extracted of the chemical for anti kryptonite , going to live in the 31 century.

Sodam Yat: (Green Lantern) Was forced to leave his planet to be chosen by a mutant alien before he died in Daxam sector, which added to the ring ion mutation to Sodam, getting used to become a soldier hero.

Ol-VIR: was part of the army of the Dominators in the invasion of the earth, when his family was killed in Imperiex troop invasion that almost took Daxam, his plans changed when he meets Darkseid in the battle against the Justice League, being a faithful soldier of Apokolips during time travel to the future, Darkseid orders and his attack troops the Legion of Super heroes, Ol-VIR meets Mon-EL making his decision to stay in the future and disinheriting Darkseid for joining the Legion, passing the lead poisoning cure of Desaad to Brainiac 5, in the ultimate perfection of daxamite healing.

Zarl Vorne: his parents tried to leave Daxam to follow Apokolips, but the rebellion against the white triangle was destroyed and annihilated by the priests, they sent Zarl Vorne in time on a starship to Apokolips, saving the boy from death, the agents of the white triangle kill his parents after the ship's takeoff, and leave a message for his son to hate Daxam. In the fall of the ship, Desaad meet the orphaned boy and adopted Zarl as his son, encouraging him to renounce his planet, named it as Powerboy. In the experience of cloning Zarl as chosen to be a spy sentry against superman the clone ends up finding his cousin, the supergirl in Metropolis, initiating the romance with her, however, the plans of Darkseid was a defeated, Powerboy joined the team of the new titans and got a disagreement with the supergirl, failing a relationship with her, Desaad encouraged the sons of Trigon to kill the fake Zarl, but the true Powerboy was in training of war in Apokolips. During the Darkseid's invasion on earth, Supergirl meets Powerboy still alive and well, with hostile attitudes, the Darkseid troop was defeated by the Justice League, Powerboy and others returns to Apokolips. Barda tell the supergirl that the fake Zarl was a spy clone, and dead for disobedience, and true Powerboy to stand next to his adoptive father Desaad, as an evil warrior in Apokolips.

Julia of Daxam: Before, Julia was a Daxamite warrior prisoner on Hope's End who joined Wonder Woman's resistance against Sangtee Empire, to dominate the empire as a new queen, Diana betrays her confidence by returning to earth and freeing the rebellious slaves, she becomes the enemy of Wonder Woman in her alien empire.

Telos Usr: The Daxamite who was inducted into the White Lantern Corps.

Si Bar: Daxamite used as a sun generator by other aliens until Superman was needed as a replacement and Si Bar passed away after being freed by Superman and Batman.

Cla'mon: He was one of four Daxamite political dissidents, who were rescued by the Justice League when the life-support systems on their space ark's stasis tubes failed. Cla'mon quickly established himself as leader of the group, and led them to make the Earth a better place after they developed powers like Superman after exposure to Earth's yellow sun. When he led them to overthrow and even try to kill the corrupt leadership of Qurac, he wound up leading his fellows into battle with the Justice League. After being shown (thanks to Cla'dek, his sister) that they were unintentionally endangering the people of Qurac, Cla'mon led the four to leave Earth and resume their fight for freedom on Daxam, against the xenophobic White Triangle government.

Members of this species are known to develop powers similar to those of Kryptonians when exposed to the direct influence of a yellow sun.

Retrieved from "https://aliens.fandom.com/wiki/Daxamite?oldid=192098"
Community content is available under CC-BY-SA unless otherwise noted.