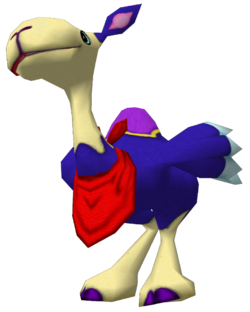 Billy Hatcher and the Giant Egg
The Datch is a hybrid creature between a Camel and an Ostrich, and one of the Egg Animals found on Morning Land.

It is a bipedal creature, its body mostly resembling an ostrich with dark blue feathers. While not able to fly, it can glide. It has the hump, head, and legs of a Camel.

Its main ability is its camel-like spit projectile.

Retrieved from "https://aliens.fandom.com/wiki/Datch?oldid=173248"
Community content is available under CC-BY-SA unless otherwise noted.