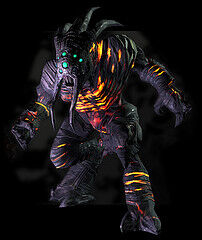 Hellgate: London Universe
The Darkspawn, also known as Imps or Gremlins, are a faction within the Primus caste that have a fascination and affinity for melding demonic magic with technology. They are insatiable in their search for the new and unknown, so they often roam the streets and tunnels of London looking for caches of items or - better yet - adventurers with powerful gear.

The Darkspawn not only craft their own equipment, but can also use any that they find during their patrols. It is not uncommon to see one wielding weapons of human design that have been separated from their original owners.

There are several distinct groups within the Darkspawn that are identified by both their specializations and their size and markings. Knowing their individual strengths and weaknesses is vital for an optimal chance of surviving an encounter.

Combing the remains of the city, and especially its numerous underground areas, is the fervent mission of these demons. They are especially devious, often laying wait in silence as unsuspecting adventurers are ambushed and dissected before they know what has happened.

These demonic marksmen seem somehow deadlier the further they are from their target. They are easily dispatched once they are drawn into close range, but they are less susceptible to being enticed to do so than their lesser kindred.

The elite warriors of the Darkspawn clans, these fierce demons wade into battle using every conceivable means of weaponry. While traditionally eschewing the weapons of man, some have been seen using the more advanced devices of humanity to devastating and surprising effect.

The Diabolists are a proud and sadistic group of demonic sorcerers. While the clans are so competitive that they do little to aid each other, rumors exist of these demons actually acting to the detriment of other clans. They will aid their own, although they prefer unleashing their arcane energies against their foes.