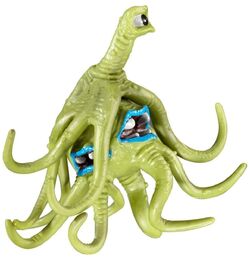 Darklings are a species of grotesque creatures commanded by the Gar sorceress Shokoti within the House of Darkness, on Eternia.

They've also been observed to dwell in the Sixth Dimension.

Darklings are medium-sized creatures with globular bodies, wriggling tentacles, multiple mouths with blue lips and sharp fangs, and a single eyestalk protruding from the top of their bodies. They form swarms to attack victims, but don't seem to possess sapience.

Retrieved from "https://aliens.fandom.com/wiki/Darkling_(Masters_of_the_Universe)?oldid=187526"
Community content is available under CC-BY-SA unless otherwise noted.