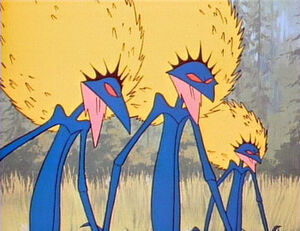 Star Wars
The Dandelion Warriors, as they're known by Ewoks, are a semi-sapient species of hostile vegetation from the forested moon of Endor, in a galaxy far, far away.

Dandelion Warriors are slender, vaguely-humanoid creatures which can disguise themselves as ordinary plants when at rest, before revealing their true form at the approach of other creatures. They have blue skin, a pair of thin arms, a v-shaped mouth, red eyes, and the top of their heads resembles a giant dandelion puff, as befitting their name.

Whenever another creature ventures into their territory, the Dandelion Warriors attack by shooting sharp yellow quills from their heads.