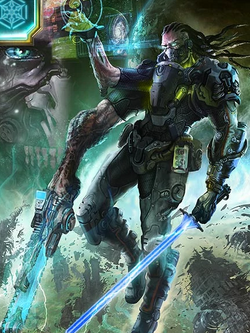 Similar color to that of Caucasian humans (possibly other colors)

Dalluish's species is an unnamed species of humanoids native to the planet Rahma.

This species seems to be either completely or very nearly indistinguishable from Humans. They possess a head, a torso, two arms and two legs. Occasionally, an individual is born with three arms. The head features two eyes, a nose and a mouth. They have four fingers and a thumb on each hand. The only known individual is an adult male with blue eyes, long black hair and a skin color similar to that of a caucasian human. It is unknown if their skin, eyes and hair come in other colors or just these.

Very little is known about the technology of this species though they seem to have invented swords that can be charged with energy as well as space suits and space travel.

Very little is known about the culture of this species. They believe any individual that is born with three arms is special and is destined to travel the stars. These individuals are precluded from ordinary work however, it is unknown if this is by choice or because of physical handicap. They are affiliated with the Malkan Federation

Retrieved from "https://aliens.fandom.com/wiki/Dalluish%27s_Species?oldid=169492"
Community content is available under CC-BY-SA unless otherwise noted.