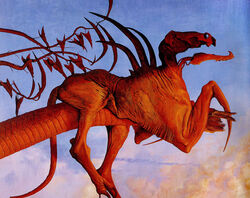 Daggerwrists are aggressive, human-sized, arboreal liquivorous carnivores. They utilize patagia - thin membranes of skin - to allow them to glide between trees, which is stretched between their front and back legs. Spines along their back aid in this gliding by providing them with extra agility, but they also serve the function of a rearward defense. They also use powerful muscles in their legs to allow them to make great leaps to maximize the distance they can cross on each glide. Like many other species on Darwin IV, they utilize bioluminescent lights.

Their species are quite clever in the catching of their prey. Their forelimbs are shaped like pitons or scythes, and are used not only for climbing, hanging and swinging on branches while up high, they are also used to make kills. Their main prey are the Trunk-Suckers, which are attracted to the large holes in the Darwinian trees that they create due to the strength and sharpness of the Daggerwrist's forelimbs. The Trunk-Suckers come for the bleeding sap, which is exactly what the Daggerwrists want them to take. Once their prey has consumed enough sap, they descend upon it. Unlike most of Darwin IV's predatory creatures, Daggerwrists have what appear to be a lower jaw, although it is in fact a portion of the skull which detaches from the rest of the face to stab its victim and inject the necessary digestive enzymes. Daggerwrists prefer Trunk-Suckers in order to consume the sap that their prey had fed on only moments earlier, making them in effect omnivorous.

If there was any Darwinian organism other than the floating Eosapiens to exhibit a well-developed social behavior, it is the Daggerwrists. Found exclusively confined to the dwindling pocket-forests dotting the planetary surface, they will travel in small bands, communicating to one another through bursts of sonar pings while following the movements of their small, quick aerial prey. However, despite this social structure, they are not above cannibalistic behavior.

Behind the Scenes[edit | edit source]

Retrieved from "https://aliens.fandom.com/wiki/Daggerwrist?oldid=180071"
Community content is available under CC-BY-SA unless otherwise noted.