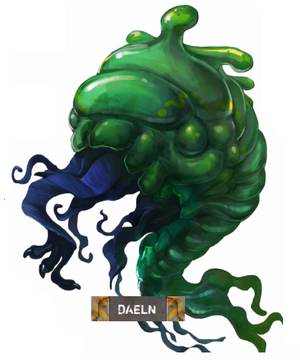 Pathfinder
Daelns are floating, gas-bag creatures native to Nejeor VI. They are peaceful animals that feed on minerals in the atmosphere.

Daelns resemble large green jellyfish, roughly 10 feet long and weighing about 200 pounds. They have long purple tentacles on the underside of their body, and no other visible organs. They are capable of modifying their body shape and chemistry, and can merge together to combine traits.

Daelns feed off minerals dissolved in Nejeor VI's atmosphere. They excrete minerals that they cannot digest in the form of compact stones, which they can launch at threats as a form of defense.

Daelns are non-sapient. They live in the upper atmosphere of Nejeor VI, one of the few animals to do so, and sift minerals from the surrounding clouds. When the kishalee ruled the planet, the daeln's larger ancestors pestered their mines, but in the present day they simply float alone or in small groups.

Retrieved from "https://aliens.fandom.com/wiki/Daeln?oldid=181644"
Community content is available under CC-BY-SA unless otherwise noted.