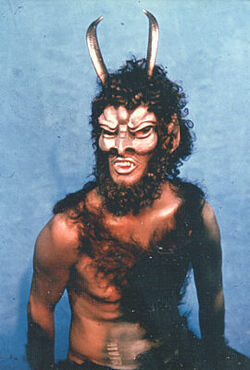 Doctor Who
The Dæmons are a powerful extraterrestrial race from the planet Dæmos, located circa 60,000 light-years from Earth, on the opposite side of the Milky Way Galaxy.

Physically, the Dæmons are horned humanoids with cloven feet, reddish skin and fur. Usually 30 ft (~ 9.1 meters) tall; they have the ability to shrink themselves as well as their spaceships, and have access to numerous abilities that, from the point of view of less advances species, can only be regarded as magical. Their powers can be used to give life to inanimate objects, such as statues. When faced with an act they consider incomprehensible; such as an individual being sacrificing their own life for another; even the greatest Dæmons will be unable to cope with the information and might be destroyed.

The Dæmons see other species as inferior and are known to perform experiments by influencing the development of primitive civilizations on alien planets; which is done purely for scientific reasons. Experiments that come to be regarded as failures will be destroyed by them. According to the Doctor, the Dæmons aren't truly evil as much as amoral.

The Dæmons came to Earth in their spaceships circa 100,000 years ago, when they helped Homo sapiens exterminate its rival species, Homo neanderthalensis, as part of a scientific experiment. The image of these horned humanoids with apparently magical abilities influenced the mythology of several cultures, causing the rise of numerous horned deities and evil beings. Many magical and occult rituals that developed on Earth are remnants of their superior, nigh-incomprehensible technology. It's been implied that they were responsible for the fall of Atlantis.

Retrieved from "https://aliens.fandom.com/wiki/Dæmon?oldid=161471"
Community content is available under CC-BY-SA unless otherwise noted.