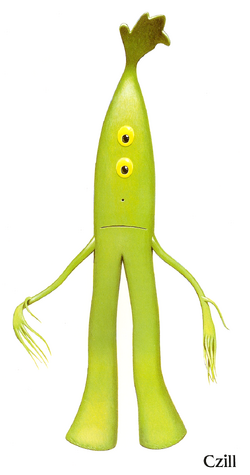 Well World
The Czill are a species of sapient mobile floral organisms who run the foremost research centre on the southern hemisphere of the Well World.

Czills have two brains, located one in each foot. They possess a large, leaf-like organ on the top of their heads, used for photosynthesis, and small pores on their skin to absorb carbon dioxide from the air. The mouth is used only for speech, and the nose is used only for smelling. Their two yellow eyes, located one above the other, have no eyelids and are permanently open. The Czill has no skeleton, its arms and legs being able to bend at any point. The arms end in six long thin fingers.

Every few days a Czill must enter in a shallow body of water. When they do that, tiny root-like structures appear under their feet and are used to absorb the water.

A Czill's average lifespan is about 250 years. They reproduce by binary fission, which generates two identical individuals, each one with all the memories and personality of the original Czill. These two beings are immediately separated, so they can have different experiences and develop into different entities.

The Czills are a very simple species, physically. They are essentially human plants, but they also lack a full-developed brain. It doesn't have the ability of “selfness” or pain. Selfness means that the Czill doesn't actually know that it is different compared to another Czill. So Czill A wouldn't know the difference between Czill B. The fact that they have no pain means that it is quite easy for painful religious sacrifices can be committed without actually harming the Czill. One might wonder why this is important. These attributes are helpful to a Czill because they believe in a god. This is where all of these attributes come together and a religious ceremony is derived.

Right after a Czill Reproduces it doesn't carry on its life as its normal self. The Czill should have always been thinking about god and what he wanted the Czills to do, but would choose its own meaning from god. Always different compared to another Czill. So what happens is that right after reproduction, which is when the Czill splits in half, it will trade one of its two eyes with another Czill. This is to see god in someone else's eyes, but still be influenced by yours. And, since the Czill doesn't know that it is different than al the others it instantly thinks it always saw god the newer way. This makes it impossible to have a clear recollection of what god is.

The Czill has a very interesting method of praying. The Czill carries its two brains in its feet. To communicate spiritually, the Czill must lean over, connecting the skinny, fiber-like, fingers to its feet. The fingers touching the feet open a spiritual light and the Czill is free to pray. Whenever the Czill must gain access to these thoughts, it simply leans over (the flexible body allows for this to occur easily), and reconnects the fingers to its feet and can once again reach the spiritual light.

The Czill has tiny drinking tendrils in their feet. Liquid passes through the rootlets and into the body. It must be daytime for the baptism so that the sunrays can fall upon the leaf so that they can be conscious. The Czills need to be at least 4 years old to get baptized. The baptism must take place in fruggle water. The process of baptizing starts off with the Zacu reading from the bible. The Czill must step in the tecka filled with furggle water and bow their head. Next, the Zacu places his/her hands over the Czill while the fruggle water is transported through the tendrils of the Czill up throughout the rest of their entire body. This process is called iggly and during iggly the Czills are becoming a part of Cuden (their God). Baptism is important for becoming part of the Czill religion.

The Czills have two brains in their broad, round feet. One brain controls their body and memory storage while the other brain is used strictly for focusing on their religion. The Czills try to take the brains of anyone who is not is not a part of their religion unless they have yet to be baptized in. The Czills take the brains for controlling their religious thoughts. Each Czill needs to get a second brain before they die to reach enlightenment. They can only reach enlightenment four times because they can only reproduce four times.