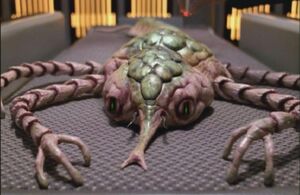 About two meters in length

Star Trek
The Cytoplasmic Pseudo-Parasite is a sapient extraterrestrial facultative parasitic species native to the Delta Quadrant of the Milky Way Galaxy. It was first encountered by the USS Voyager crew, which was unable to properly communicate with the species, due to its unusually complex language.

This being has a long, segmented body covered by large scales. It is pinkish purple in color, with a shiny hue of green running on its head and back. It has two pairs of long thin arms, each ending in tridactyl hands. The head sports a pair of large eyes with green pupils, a short proboscis with a bifurcated end and two small feelers protruding from the base of the proboscis. The creature is described as a pseudo-parasite, which means that it is able to live either independently or parasitically. It controls its spaceship by means of biochemical secretions and communicates via high-pitched shrieks. An intelligent species, its language is surprisingly complex and cannot be properly translated by Federation universal translators. The creature, however, is capable of understanding humanoid languages. This could be because its species possesses technological devices analogous to the Federation translator. An alternative explanation would be that they are capable of telepathy.

The Cytoplasmic Pseudo-Parasite found by the Voyager in 2375 was injured and attached itself to B'Elanna Torres, secreting substances in order to take control of her biological systems to sustain itself. The ship's doctor was ultimately able to remove it without harming either parasite or host. The creature was then beamed down to a ship of its own species, which had come to rescue it.

This creature is described as a previously unknown type of cytoplasmic lifeform, implying that there are other species also bearing this designation. The exact meaning of the term is never given, but since cytoplasm refers to the cellular material enclosed within the cell membrane and outside the nucleus (in case of eukaryote organisms; as bacteria and archaea lack an organized cellular nucleus, their genetic material is located within the cytoplasm) it could mean that Cytoplasmic Lifeforms are those which lack cell membranes and organized nuclei, having their whole bodies filled with a continuous cytoplasm. In this case, the organism could be simply referred to as unicellular, though.

Retrieved from "https://aliens.fandom.com/wiki/Cytoplasmic_Pseudo-Parasite?oldid=164781"
Community content is available under CC-BY-SA unless otherwise noted.