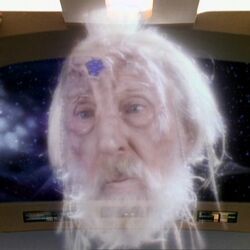 The Cytherians are an advanced sapient species inhabiting the deep core region of the Milky Way galaxy. They typically manifest themselves in the form of a translucent humanoid head; and are probably non-corporeal entities.

Cytherians identify themselves as explorers, willing to know about other species, however their methods are most unorthodox. Rather than exploring the galaxy by themselves, they send automatic probes which are capable of altering the nervous system of other lifeforms that make contact with them, temporarily granting them with extraordinary mental abilities and a strong desire to create the technology necessary to reach the galactic core. Hence, the Cytherians bring other civilizations to themselves, benefiting their new acquaintances in the process.

Retrieved from "https://aliens.fandom.com/wiki/Cytherian?oldid=81782"
Community content is available under CC-BY-SA unless otherwise noted.