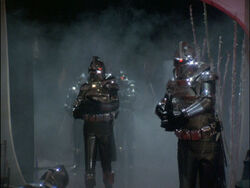 Created by the serpentine Cylon

Battlestar Galactica
The Cylon are a race of mechanical beings originally created by the now-extinct serpentine Cylon, from the planet of the same name. They went to war against the Twelve Colonies of Kobol as they sought to expand their own empire into the territory of the Hasaries, and mankind intervened. Because of this, all of the Human race has been dubbed a target.

Cylons are led by the Imperious Leader, an IL-Series Cylon who was elevated to a supreme leadership position over all other Cylons. When responding to an order, Cylons from the IL-Series down will repeat the phrase "By your command", perhaps a tide-over from their ancestral programming by the Cylon. Cylon culture is also almost entirely military, although a civilian outpost of Cylons was once spotted on Gamoray by the Battlestar Galactica and her wayward flotilla; until this point, no civilian Cylon outposts had been discovered.

Only three races are known to have been conquered by the Cylon Empire: the aforementioned Hasaries, the Delphians, and the Ovions. These three species have been forced into forming the Cylon Alliance.