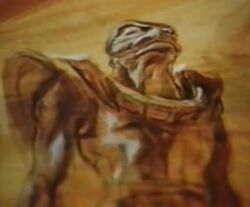 The Cylon were a race of reptilian, serpentine organisms who created the now-masterless Cylon Robots.

They originated from the planet Cylon and went extinct hundreds of years before mankind ever encountered their deadly creations. They discovered Earth, as many species before them had, and upon seeing the ancestors of man, decided it to be a perfect form; this is why their robotic creations are bipedal, when they themselves were not.

Retrieved from "https://aliens.fandom.com/wiki/Cylon?oldid=181308"
Community content is available under CC-BY-SA unless otherwise noted.