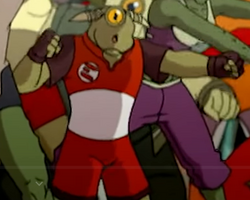 Cyclopain is humanoid species from planet Cyclopaias. They one big yellow eye on they forehead, clapy ears and 4 fingers in they hands. Most of them have yellow skin however there exist individuals with gray. Usually they hight is circa 160 centimeters however there also exist taller representatives as tall as Humans.

The Psycho Bug was native flux for this species. The flux manifests itself as a stream of green rings that emit from the eye of the user.

Cyclopians had they representation in Galactik Football Tournament witch was The Cyclops. They serve as one of the more comical teams in the series, upholding a goofier playstyle and personality than the other teams. However, they seem to have very little regards towards rules as they have been seen cheating numerous times throughout the series. Their style of play is incredibly outlandish, adopting a "strength in numbers" approach; when attacking, they get into an organized position in which the attacker will be completely protected with fellow teammates, when the attacker is ready to shoot, all six players will form a horizontal line. When defending, three Cyclops will usually charge head-on against the opposing attacker in an attempt to intercept them.

Retrieved from "https://aliens.fandom.com/wiki/Cyclopian?oldid=182681"
Community content is available under CC-BY-SA unless otherwise noted.