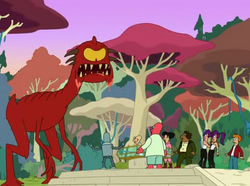 Futurama
Cyclophages are endangered two legged creatures that live on the Cyclophage Preserve.

It can be described as a red skinned theropod like creature but with a single eye and six horns located on each sides of its head. When catching its prey, the cyclophage would uses it tongue it stick it similar to a frog. Their method of reproduction is unknown, but they most likely lay eggs.

The most recent encounter was with the Planet Express, carrying out the presumably deceased Turanga Leela's final wish, to have her body eaten by a cyclophage. But after she was revived, they got on the ship and escaped the planet, while inadvertently bringing the creature to Earth after it latched on to the ship (implying it can survive the vacuum of space). It is unknown why the species is endangered, but since their diet is cyclopes (the proper plural of "cyclops") and they are cycloptic themselves, they could be eating each other to extinction.

Retrieved from "https://aliens.fandom.com/wiki/Cyclophage?oldid=191458"
Community content is available under CC-BY-SA unless otherwise noted.