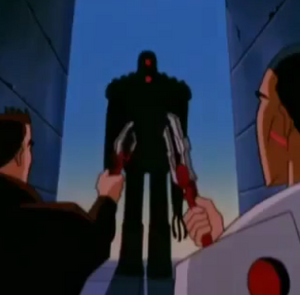 Roswell Conspiracies
The Cyclops are a race of robots designed by the Titani to protect worlds from the Shadoen invasion.

The Cyclops were large metallic constructs roughly shaped as Humans created by the Titani centuries ago. These grey skinned giants possessed two red circular eyes; one located on their chest and the other on their head which was capable of rotating around to observe its surroundings. The eye mechanism located on the head was capable of firing energy bolts.

The central eye was also capable of manipulating Titani technology such as doors and was able to brainwash Humans to serve as its helpers in various tasks. This brainwashing process was capable of sharing information with its 'captives' allowing them to understand the purpose of the machines.

Damaging their eyes can incapacitate them, but they possess an internal repair mechanism that can put them into working operation despite centuries of neglect, as shown from a Cyclops that laid dormant for centuries with its eye impaled, only to repair itself once the obstruction was gone.

The Cylops were constructed by the Titani, and sent to Earth to protect the planet from the Shadoens. In addition to being the basis for the Cyclops, another member was known as the basis for the myth of the giant automaton known as Talos. The Cyclops successfully defended the planet in the 15th century BC, but wiped out the Aegean civilization (Atlantis: the most prosperous human culture at the time) in the process via a unintended tsunami, possibly giving the rlegend of Atlantis and the Cyclops from Greek mythology. They were reactivated later on in the 1990s and tried to fire a massive beam cannon on the island of Santorini at the second Shadoen invasion fleet coming towards the Solar System, but were destroyed by the Alliance under the manipulation of General Rinaker, who was secretly a Shadoen agent.

Retrieved from "https://aliens.fandom.com/wiki/Cyclop_(Roswell_Conspiracies)?oldid=182679"
Community content is available under CC-BY-SA unless otherwise noted.