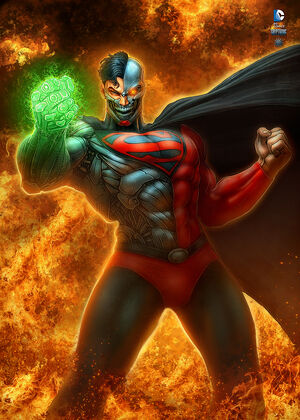 Henry "Hank" Henshaw was a Human astronaut, turned Kryptonian Cyborg. He is an ally of the Sinestro Corps and enemy of Superman, as well as an enemy of the Green Lantern Corps under the alias of Cyborg Superman.

Hank Henshaw was once an astronaut, working for LexCorp, as well as a crew member aboard the doomed shuttle Excalibur. He was 1 of 4 crew members, another of which was his wife Terri. Him and his crew were exposed to a radiation storm, which caused the shuttle to crash. 2 of the crew members lost their bodies but remained alive, making new bodies for them through rocks and cosmic energy. Hank only received white hair, but both he and his wife showed no side effects, at least not initially. Soon after, Henshaw's body began decaying at an alarming rate, while Terri began phasing out of their own dimension. While Terri was saved, Hank however passed away almost immediately after this.

Though Superman blamed himself for the events which unfolded due to his battle with the Eradicator, Terri assured him that was not the case, as the solar storm they were exposed to happened prior to what happened with him. This meant what happened was simply a tragic accident that couldn't be avoided. Though Henshaw's body was gone, his consciousness was not and he transferred it into a LexCorp mainframe, constructing himself a makeshift body in order to reunite with Terri. Appearing before his wife, Terri couldn't take the much more shock, as the sight of her now robotic husband was enough to lead her down the path of insanity and eventual suicide.

Hank's consciousness began disrupting communications all across the world, eventually enabling him to enter the birthing matrix of Superman himself. He crafted a small exploration craft, learning about other life within the universe. He would become paranoid and disillusioned after some time, causing him to believe the event resulting in the death of himself and the deaths of his crew were all Superman's fault. He would soon find himself on Warworld, where he met one of Superman's other enemies, Mongul. He forcibly recruited the warlord and made his way back to Earth in order to seek revenge against the Man of Steel.

Following his return to Earth, Hank found out that the Man of Steel had died at the hands of the beast known as Doomsday. Through the birthing matrix, he was able to construct a body of cybernetics, complete with some organic components. With killing the Man of Steel out of the question, Hank decided to begin destroying his reputation as a hero. He destroyed a memorial plaque, as well as exiled Doomsday to deep space and protected the President from being assassinated. He explained that the cybernetic pieces were due to his fight with Doomsday and it would be after his saving of the President, that he was dubbed the "True Superman". When it came to Lois Lane confronting him however, Hank's knowledge of her was so called "blurry" and remembered a rocket crashing as well as the name of Kent.

The result of his arrival had also led to the rise of 3 others, John Henry Irons or Steel, the Eradicator and of course, Kon-El or Superboy.

Hank's true intentions were revealed when he attacked the Eradicator and the arrival of an alien ship over Coast City. As Hank engaged the Eradicator, Mongul had wiped out all of Coast City, resulting in millions dead. Despite this, Hank was able to convince the public that the Eradicator was the perpetrator behind Coast City's destruction, which made them turn on the Eradicator. He nearly killed the Kryptonian, as well as Superboy and was about to launch a rocket with a warhead capable of converting Metropolis into a second Engine City. Despite his defeat, Superboy was able to flee and warned the actual Superman, who had been in a healing coma for sometime. Supergirl and Steel were also with Superman when Conner arrived, leading to them to confront the cyborg in force.

As Superboy went to stop the missile, Hal Jordan aided in the fight against Mongul, as his home had been completely destroyed by the warlord, leaving Superman, Steel and Supergirl to deal with Hank. During their engagement, Hank attempted to use the Kryptonite of the main reactor for the Engine City to kill Superman, only for the Eradicator to take the full blast, sacrificing himself, but also converting the Kryptonite energy into solar energy for Superman to absorb as the energy went through him. With the sudden boost in power, Superman was able to defeat the cyborg, already weakened by the effects of the Kryptonite, by vibrating Hank's body to pieces.

Prior to his destruction, Hank was able to place a device on the exiled Doomsday. Even though his body had been destroyed by Superman, he was able to utilize the device he placed on the beast in order to survive. Doomsday was able to escape his prison, via being picked up aboard a space cruiser and found himself on the planet Apokolips. Once there, Hank re-emerged from the device, taking the exo armor of soldier, forming a new body. Both he and Doomsday began laying waste to the planet, even though he did possess Superman's DNA, Doomsday didn't consider him a threat. Ultimately however, Hank was destroyed by Darkseid's omega beams after another battle with Superman.

Hank Henshaw was initially a Caucasian human male, however after being exposed to a massive amount of radiation, he changed, though not initially. His hair had changed white and after a bit, his body decayed to the point where it expired. Sometime later, he would build himself a bulky robot body out of a LexCorp mainframe, however this form didn't last and fashioned himself a body out of organic material and machinery. The newer body was as almost identical to that of Superman as he got. This time, he possessed black hair, 500 lb. standing at 6' 3". One arm was made from organic material, as well as one half of his chest and at least one leg. He also had one eye with organic material, as well as black hair.

What made up the rest of his body was all machinery, which he could manipulate at will. Some parts of his body were clothed in Superman's blue uniform with red trunks and yellow belt. He too also had the House of El crest upon his chest, but the part of it made from machinery was more metallic and not yellow or red, while the other half was indeed red and yellow. The cape he wore was however, not altered, as it maintained the red coloring, as well as the yellow House of El family crest upon the back of it.

Later versions of Hank show him with a suit of both black and red. What was once blue for his uniform are red, with a black line going up the middle, breaking off at the House of El crest and up to his shoulders in an upside down triangle. Superman's family crest however on this body was all red, with no yellow within the diamond shape, but black. He also had a black belt, red trunks, complete with black pants and a cape. He also wore red boots identical to that of Superman as well. Some versions of Hank in this form also have him with the Sinestro Corps symbol within the diamond shape on his chest, rather than that of the House of El, as well as a Qwardian Power Ring.

Retrieved from "https://aliens.fandom.com/wiki/Cyborg_Superman?oldid=177925"
Community content is available under CC-BY-SA unless otherwise noted.