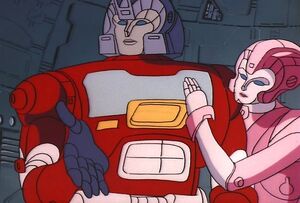 None (fueled by energon)

Transformers
The Cybertronians; more commonly known to the Human race as Transformers; are a species of autonomous robotic life forms originating from Cybertron: an artificial planetoid orbiting a distant star.

Cybertronians are a machine race, and as thus they do not breathe, consume food or drink like biological races. Instead, Cybertronians use a rare substance called energon as a fuel or "life force". In its raw form, it is actually harmful to them (although not to organic life) but in its processed form, it is essential to their survival. Cybertronian technology has developed to the point where they can convert most forms of energy into energon.

Retrieved from "https://aliens.fandom.com/wiki/Cybertronian?oldid=192961"
Community content is available under CC-BY-SA unless otherwise noted.