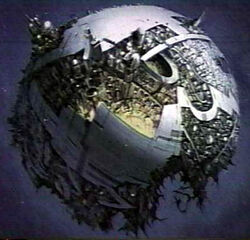 Cybertron is a massive robotic living world, the home planet of the Cybertronians, and formerly used as a factory world by the corrupt Quintessons. It is ostensibly the body of the Cybertronian creator god, and Lord of the Light Gods, Primus. 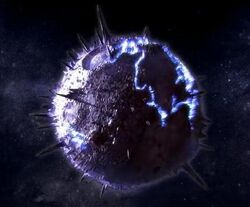 As a rogue planet, Cybertron doesn't orbit a sun. Its present location is in the outer Sol System, having been formerly located in the Alpha Centauri System. It is orbited by three moons: Moonbase 1, Moonbase 2 and Unicron. It's regarded as a terrestrial planet, with an atmosphere breathable for natives, and its primary terrains include metallic wastelands, deep canyons, acid swamps, spires, subterranean caves and subterranean cities.

Retrieved from "https://aliens.fandom.com/wiki/Cybertron?oldid=163922"
Community content is available under CC-BY-SA unless otherwise noted.