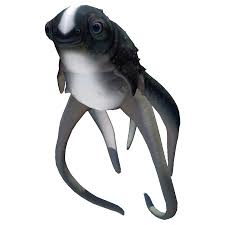 Earth (formerly and possibly)
4546B

Can learn simple and complex tricks

Subnautica
The Cuddlefish is a small social herbivore found on 4546B. They can be tamed and only five of their eggs are found in the Crater.

The Cuddlefish is a rotund, aquatic creature with two small fins and five tentacles around its rear. They have slightly bulging eyes and several small teeth. A white arrow runs along the back of the creature.

As their name implies, the cuddlefish is a social creature that enjoys being around company, cuddlefish or otherwise. They can be fed small treats and enjoy being pet.

Retrieved from "https://aliens.fandom.com/wiki/Cuddlefish?oldid=186084"
Community content is available under CC-BY-SA unless otherwise noted.