"That is not dead which can eternal lie,
And with strange aeons even death may die."
―Abdul Alhazred, Necronomicon 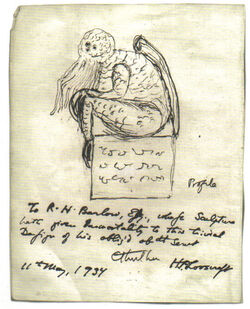 The idol of Cthulhu, sketched by H. P. Lovecraft.

Humanoid with draconic and cephalopod features

Spawn of Cthulhu
Great Old Ones

H. P. Lovecraft
Cthulhu is a giant cosmic entity with the head of an octopus, rubbery skin, prodigious claws on his hands and feet, and long narrow wings on his back. His name might be derived from the Classical Greek word "chthonic", meaning "subterranean"; although he's been more commonly associated with the water element.

Cthulhu serves the high-priest and leader of a race of land-based octopus-like creatures which have come from the skies to colonize Earth in prehistory. Although currently in a deathlike state of hibernation at the bottom of the ocean, Cthulhu and his alien brethren can still manifest themselves in the minds of some people, and are predicted to be revived once the stars are in the right conformation.

Despite his unearthly origins, Cthulhu's status as a deity worshiped by Humans, Deep Ones and K'n-yanians has made him an important figure in the history of Earth.

Little is known about Cthulhu's origins, other than he's the offspring of a being called Nug and the grandchild of the Outer Gods Yog-Sothoth and Shub-Niggurath - both of which are grandchildren of the primordial Azathoth, who created the universe.

Cthulhu is a gigantic humanoid with both cephalopod and draconian features and the ability to heal body damage. His size has been compared to a mountain. He is perhaps most notable for the deeply disruptive effects that his physical or mental presence may have in the minds of Humans. A mere gaze of his physical form may easily induce insanity and even death for the unfortunate witness. Even from his sunken tomb in R'lyeh, in the Pacific Ocean, Cthulhu can manifest his presence in the subconscious minds of particularly sensitive people, especially cultists, madmen and artists. The most frequent manifestation occurs in the form of nightmares.

Since few who actually saw Cthulhu have survived the encounter and retained their sanity intact, the most detailed descriptions are based on statues or idols of the creature. One, constructed by an artist after a series of baleful dreams, is said to have "yielded simultaneous pictures of an octopus, a dragon, and a human caricature.... A pulpy, tentacled head surmounted a grotesque and scaly body with rudimentary wings". Another, recovered by police from a raid on a murderous cult, "represented a monster of vaguely anthropoid outline, but with an octopus-like head whose face was a mass of feelers, a scaly, rubbery-looking body, prodigious claws on hind and fore feet, and long, narrow wings behind".

At some point in the Paleozoic Era, Cthulhu arrived on Earth along with his escort of alien followers who built stone cities of non-euclidean architecture and fought long-standing wars against another alien race known as the Elder Things. He is also credited with transporting the alien ancestors of the K'n-yanian species to Earth in the distant past.

The secret cult of Cthulhu is extremely ancient and spread throughout the globe, from New Zealand to Greenland, from the USA to China. Mention has been made of the "undying leaders of the cult in the mountains of China". Cultists believe that "the Great Old Ones" will liberate them from law and morals, and their rituals are noted as disturbingly animalistic, wild and even murderous. It should be noted, however, that the expression "Great Old Ones" here refers to the Spawn of Cthulhu and not to the pantheon that he belongs to.

In addition to this Human cult, Cthulhu is also worshiped by aquatic Deep Ones and might be related to, or even represent the same entity as their god Dagon (although most evidence points out that Dagon is simply a gigantic Deep One).

The rituals of the cult of Cthulhu notably involve the chanting of the phrase "Ph'nglui mglw'nafh Cthulhu R'lyeh wgah'nagl fhtagn", which is translated as "In his house at R'lyeh dead Cthulhu waits dreaming". The phrase can also be shortened to just "Cthulhu fhtagn".

According to the cultist known as Old Castro, Cthulhu and his star spawn (which Castro refers to as "Great Old Ones") have come from the stars and built their cities long before the advent of mankind. He also claims that, although they have a physical shape, they're not made of matter, which explains their extraordinary abilities. It is believed that, when the stars are arranged in a certain way, they can hop effortlessly from one world to another. Conversely, when the stars are not in that right conformation they cannot live, but are unable to truly die either so instead they remain in a state that the cultists refer to as death, but which more closely resembles a form of stasis, hibernation or cryptobiosis. Even in that state, they can still be perceived and manifest themselves in the minds of men, especially those artistically inclined - poets, sculptors, architects, etc.

"These Great Old Ones, Castro continued, were not composed altogether of flesh and blood. They had shape - for did not this star-fashioned image prove it? - but that shape was not made of matter. When the stars were right, They could plunge from world to world through the sky; but when the stars were wrong, They could not live. But although They no longer lived, They would never really die. They all lay in stone houses in Their great city of R'lyeh, preserved by the spells of mighty Cthulhu for a glorious resurrection when the stars and the earth might once more be ready for Them. But at that time some force from outside must serve to liberate Their bodies. The spells that preserved Them intact likewise prevented Them from making an initial move, and They could only lie awake in the dark and think whilst uncounted millions of years rolled by. They knew all that was occurring in the universe, but Their mode of speech was transmitted thought. Even now They talked in Their tombs. When, after infinities of chaos, the first men came, the Great Old Ones spoke to the sensitive among them by moulding their dreams; for only thus could Their language reach the fleshly minds of mammals."
―Francis Wayland Thurston, relating what Old Castro told Inspector Legrasse in 1907.

In his studies of the occult, Albert Wilmarth claimed that he learned "whence Cthulhu first came, and why half the great temporary stars of history had flared forth". On a latter addressed to Wilmarth, Henry Akeley referred to "the fearful myths antedating the coming of man to the Earth - the Yog-Sothoth and Cthulhu cycles - which are hinted at in the Necronomicon". He also found that Cthulhu is among the entities worshiped by the alien Mi-Go race, which share the Spawn of Cthulhu's unknown material compositions and are referred to by some Humans as "the old ones".

The claim that the Cthulhu spawn have colonized Earth in prehistory and that they're not made of ordinary matter is latter corroborated by imagery found in the prehuman ruins of the alien Elder Things in Antarctica, which are enemies of both the Mi-Go and the Spawn of Cthulhu. 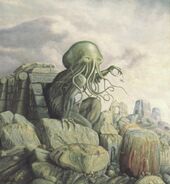 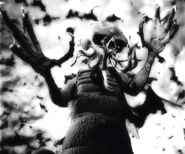 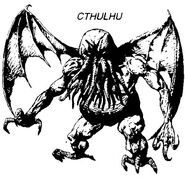 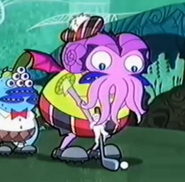 The Grim Adventures of Billy & Mandy

Broken Moon: Legends of The Deep

Fall of Cthulhu
Add a photo to this gallery

Retrieved from "https://aliens.fandom.com/wiki/Cthulhu?oldid=199961"
Community content is available under CC-BY-SA unless otherwise noted.