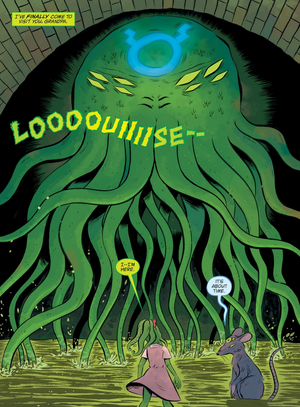 Cthu-Lou the Many-Angled One. The Dark Son of Carcosa. Bin Tot Sokum Tik by humanity's ancestor.

Cthu-Lou was a Great Old One that lived beneath Spiral City in the sewers always seeking to conquer the world and repopulate the planet with his spawn through his chosen.

A biology professor at Spiral University that spliced his DNA with a radioactive octopus. His transformation made him go insane, killing six of his grad students. He was fought by Abraham Slam and the Black Hammer.

A plumber that lived in Spiral City that was summoned by Cth-Lou to become his vessel. He attempted to become a super villain for awhile, but his repeated defeats caused him to retire becoming a drunken deadbeat. He and his wife had a child Cthu-Louise who inherited her octopus traits from her father.

The daughter of the previous Cth-Lou, she was born with her deformity as an vessel of her grandfather the Many-Angled One. Due to her appearance she was often the subject of ridicule by her peers. Unlike her father who resisted the call of his master through alcohol, Louise gave into her grandfather's promise of a better life and sacrificed her tormentors to allow the Great Old One power. He then proceed to eat her transporting her to a world where she could be normal.

Cth-Lou was an ancient extra-dimensional entity that was capable of great feats of power, so long as he had a vessel and was given sacrifices.

Retrieved from "https://aliens.fandom.com/wiki/Cthu-Lou?oldid=175579"
Community content is available under CC-BY-SA unless otherwise noted.