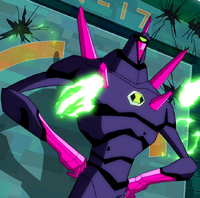 Ben 10
Crystalsapiens are a crystalline alien species native to Petropia.

Crystalsapiens are one-eyed silicon-based lifeforms made of a highly durable purple crystal with magenta hands, faces, and spike-like crystal shards all over their bodies. There are six shards on their backs, two on their chests, and one at the top of their heads akin to a horn. Their legs and arms have several black lines and dots on them.

Crystalsapiens are capable of absorbing any type of energy, including lasers, electricity, Mana, radiation,[1] and even Captain Marvel's cosmic energy blasts.[2] They can channel the energy they have absorbed into powerful ultraviolet beams that vary in power depending on how powerful the energy from an opponent's attack is.

In correlation to their electricity immunity, Crystalsapiens can conduct it back at their attackers.

Crystalsapiens can project a beam of light from their hands to illuminate dark places. The light they generate also makes them immune to being possessed by an Ectonurite.[2]

Crystalsapiens possess enhanced durability thanks to the indestructible silicon compounds of their dense crystalline skin,[3] making it very hard for enemies to physically hurt or even smash them. Their skin also makes them immune to a Xenocite's attempt at merging with them.

Crystalsapiens are able to fly, and leave an ultraviolet trail while doing so. Because they are crystalline in nature, they can survive in the vacuum of space.

If a big enough light source were to shine through them, Crystalsapiens can create a big beautiful rainbow in the sky.[2]

Despite being highly durable, Crystalsapiens can be shattered by extreme force.

Despite both their immunity to and conduction of electricity, Crystalsapiens are unable to absorb electricity while it is being conducted by water.

Crystalsapiens are unable to absorb energy when they are either not expecting it or too weak to do so.

There is a limit to how much energy a Crystalsapien can absorb at once before being overwhelmed to the point of crumbling apart. Similarly, they would be disintegrated fairly instantaneously if they were to absorb energy equivalent to the Big Bang.[2]

Despite their enhanced strength, Crystalsapiens are physically weaker than Vaxasaurians.[4]

A Crystalsapien's ultraviolet beams are ineffective against a Chimera Sui Generis, and can be absorbed by Conductoids.[2]

Crystalsapiens can be affected by magic, as there are spells that can bury them in the ground and alter their gravity.

Like other living beings, Crystalsapiens can be controlled by a Vladat's Corrupturas. This is because the Corrupturas are crystalline entities themselves.[2]

There is a limit to a Crystalsapien's heat resistance, as they would probably not do well if they were to be thrown into a sun.[2]

There is a legend that the Crystalsapiens' home planet is Mor' Otesi. However, this is not true because the planet itself does not exist.[4] 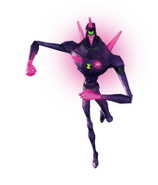 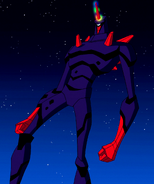 Sugilite
Add a photo to this gallery

Retrieved from "https://aliens.fandom.com/wiki/Crystalsapien?oldid=189704"
Community content is available under CC-BY-SA unless otherwise noted.