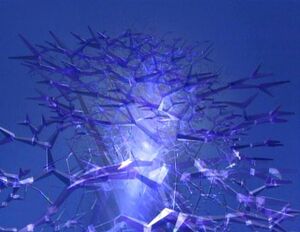 Can communicate via subspace or gravitational pulses

Star Trek
The Crystalline Entity is a huge, spaceborne lifeform whose body consists of a complex crystalline structure similar to a snowflake in shape.

This organism is considered a massive planetary threat; it travels through space using a natural warp travel ability, visiting life-supporting worlds and feeding on the entire biosphere.

The Entity consumes matter from a planetary surface by emitting a powerful ray which destroys everything organic and converts it into energy for the entity's metabolism. This "feeding ray" is able to penetrate rock and earth, devouring all fauna, flora and microbial life, even in the underground. This species' workings have been compared to a giant, living electromagnetic collector. There have also been instances in which the entity attacked spaceships and devoured the crew, although at least in the case of Galaxy-class Federation ships, activating the shields will be enough to prevent the Crystalline Entity from penetrating the hull.

The Crystalline Entity appears to be either sapient or semi-sapient, although Captain Picard believes that it is most likely not evil and has no conscience of the damage it is doing by killing millions. He compares the situation to that of the whales on Earth, which feed upon millions of smaller creatures not out of hatred but simply because they need to eat.

There are two currently known ways to communicate with the Crystalline Entity: via subspace messages, as done by Lore, or using graviton pulses, as attempted by the USS Enterprise-D in 2368.

Very few people have been lucky enough to survive an attack by the Crystalline Entity. Among them was Dr. Noonian Soong, the creator of Soong-type Androids, including Data and his brother Lore. Dr. Soong and his wife escaped the planet Omicron Theta in an escape pod when it was attacked by the Crystalline Entity. It was later discovered that Lore, who dismisses all organic lifeforms as inferior, was responsible for contacting the Crystalline Entity and bringing it to Omicron Theta. His brother Data, who was deactivated at the time, also survived the attack despite remaining on the planet, proving that the Crystalline Entity is either unable or unwilling to feed on artificial lifeforms. Alternatively, it is possible that after its conversations with Lore it had achieved a respect for the Android species, which would apply to Data as well. This was probably the reason why, many years later, a small group of colonists hiding on a cave was spared when the Entity attacked their colony, as Data was present in the group. However, Data himself has stated that the combination of metals kelbonite and fistrium was more likely to be the reason why the Crystalline Entity did not kill them.

The USS Enterprise-D's attempt to communicate with the Crystalline Entity in 2368 using gravitational pulses was unsuccessful and ultimately resulted in the creature's death, as Dr. Kila Marr, whose son had been eaten by the entity, purposely increased the gravitational emissions until the entity was shattered. Before it died, however, the Entity did respond with series of pulses which seemed to be meaningful, providing further evidence of its intelligence. The messages were never decoded, though, as far as we know.