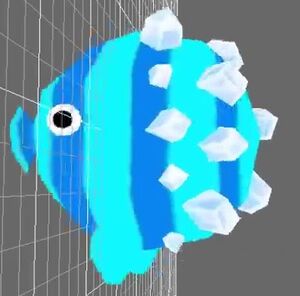 Pikmin
The Crystal Blowhog, also known simply as the Suisyo, is a extinct species of Blowhog that once lived on PNF-404.

The Crystal Blowhog, according to fossil records, seemingly is from the aerial subgroup of Blowhogs, and as such doesn't have any legs. Its body is blue in color with dark blue stripes running along its body. True to its name, numerous crystals were discovered on the creature's back.

It perhapds behaved much like other floating Blowhogs, and the crystals were used as extra protection. However, it's hypothesized that these crystals made it harder to fly, resulting in its extinction.

Retrieved from "https://aliens.fandom.com/wiki/Crystal_Blowhog?oldid=181642"
Community content is available under CC-BY-SA unless otherwise noted.