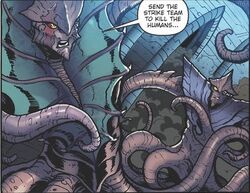 Godzilla Universe
The Cryog are a race of shapeshifting sapient tentacled aliens that are major antagonists in the comic book series Godzilla: Rulers of Earth. They are initially led by Rhizon before he is replaced by the Cryog Emperor, Karkaro.

The Cryog have a very unique physiology. They possess multiple tentacles, some of which are used as legs to keep them standing and moving upright. They also possess a pair of fully-prehensile tentacles that they use as arms. The Cryogs' heads are pointed at the top, and they possess two human like eyes and a single mouth. Most of the Cryog possess blue to purple skin, although their emperor, Karakaro, has dark red skin. The Cryog (with the exception of Karkaro, who wears a sort of robe) do not seem to wear clothing aside from scanners they occasionally wear over their eyes, but they do possess large intricate formations on their bodies that resemble clothing and often denote rank. The lower-ranking Cryog soldiers have triangular armor-like formations on their upper bodies, while the commander, Rhizon, has an ornate frill on his chest. Karkaro, the Cryog emperor, has a crown-like formation on his head, and a massive spike-covered frill surrounding his head and upper body. Karkaro's elite guard are shown to wear helmets with single glowing red eye slits, resembling the face of Gigan.

The Cryog possess the ability to shapeshift into perfect imitations of other sapient races, such as humans and Devonians. This ability makes it very easy for the Cryog to infiltrate their enemies and manipulate and destroy them from the inside.

The Cryog possess very advanced technology. The Cryogs' spaceships seem to be bio-mechanical in nature, as they feature very organic-looking exterior armor and some even possess tentacles. The Cryog are skilled in robotics, as they applied very powerful cybernetic upgrades to the cyborg monster Gigan, built an entire army of MechaGodzillas, and even managed to revive King Ghidorah as the cyborg Mecha-King Ghidorah, which they later found they were unable to control.

The Cryog also possess prowess in genetic engineering. They were able to create an entire species of giant alien monsters called Trilopods, which are completely under their control and have the ability to steal the genetic information from other monsters and mutate into clones of them.

Not much is known about Cryog society. What is known is that the Cryog are ruled by an emperor, who seems to hold nearly absolute power. The Cryog are a very militaristic culture, and operate a massive fleet of warships. All of the Cryog seen so far are involved in a military conquest of Earth. It is possible that the Cryog rule an intergalactic empire and wish to add the Earth to it, or perhaps they desire to claim it as a new homeworld. Also of note is that no female Cryog have appeared so far, suggesting that females do not participate in military operations for whatever reason.

Retrieved from "https://aliens.fandom.com/wiki/Cryog?oldid=141230"
Community content is available under CC-BY-SA unless otherwise noted.