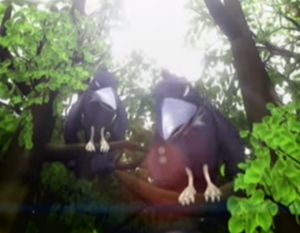 SEGA
Crows are an avian species within the parallel World of the Chickens.

In their default form, Crows almost exactly mirror their Earth counterparts: large birds with dark blue to black feathers and very large pointed beaks. They have lighter feathers on top of their chests, just under the neck, and their feet end in four toes rather than three toes on actual Crows.

Crows typically are more bird-like, yet there're some individuals that appear more humanoid.

Although more than willing to attack and invade, most Crows often hide themselves behind magical means, and disguise their true appearance as other animals. The kind of animals they can transform to is seemingly limitless, them able to turn into numerous mammals, reptiles, fish, and even insects. The main purpose of this is to make them more efficient in taking over the land, their new form depending on the location.

Little is truly known of the society of the Crows, though they have shown a sort a mixture of invasive and secretive factors to their society. They're highly aggressive, often attacking on sight with little to no provocation, and willingly performing numerous crimes and acts against the Chickens, including kidnapping, larceny, and murder.

Retrieved from "https://aliens.fandom.com/wiki/Crow?oldid=181735"
Community content is available under CC-BY-SA unless otherwise noted.