Crocomires are huge, multi-eyed creatures that live in the Norfair regions of the rogue planet Zebes. While apparently thermophilic in nature, they are not capable of surviving being dunked in lava, restricting their movement as they grow older. Young Crocomires are known as Stokes, in a similar manner to the young of cats being called kittens or those of dogs being called puppies. Strangely enough, they seem to be able to survive and in fact mobilize for a very short period of time as a simple skeleton, leading one to assume that they do not move by way of muscles like many organisms do.

The skin of a Crocomire may have a waxy property to it, and when heated to high temperatures becomes sticky and seems almost to perpetually ooze. Not only this, but it is incredibly resistant, a likely indication of how it survives in the heat or the magma-filled pools. Bounty hunters and the like must take care when encountering the rare and dangerous creatures that Crocomires are, as conventional weapon systems such as missiles, super missiles, and even beam technology will simply temporarily push the creature back. Luckily, for the most part Crocomires are relatively sluggish and usually simply lumber about.

While young stokes often breathe gouts of flame, full-grown adults will spit fireballs instead, although how this is done has never been researched, at least not by the Galactic Federation. They also have sharp claws that they will often rake at closer opponents.

When Samus Aran faced a Crocomire in her second mission to Zebes, she had to push it back far enough to collapse through an old bridge and melt gruesomely in the lava as it desperately tried to escape the death trap, seemingly to no avail. However, in a final attempt to make it out of the lava alive, it same to the other side of the cavern and broke through a wall of spikes that the Space Pirates had presumably set up there to deter the famous bounty huntress. Unfortunately for the Crocomire, it did this with the last ounce of its strength, and it collapsed as a pile of bones.

Crocomire was also planned to make an appearance in Metroid: Zero Mission, but this was probably cancelled due to a time problem. However, the Crocomire can still be accessed by hacking in the gamecode

Crocomire, as seen in Super Metroid

The Crocomire in Metroid: Zero Mission, that can be accessed by hacking the game 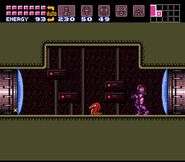 A hack of Super Metroid that allows for Stokes to appear in-game. 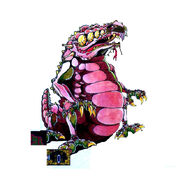