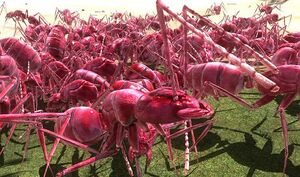 Crimson Ants are a tougher, more deadly subspecies to the Terror Ants created by the Ravagers and released onto Earth for means of takeover and attack.

Essentially, the Crimson Ant is the same in behavior towards the normal Terror Ant, but classified by both humans and ravagers as its own being. Many of the Terror Ants' abilities and strengths are pushed to extremes in the Crimson Ant: stronger, tougher, and more aggressive like the red subspecies of Hornets. Physically they are "black ants", but with a bright red tint.

As the Crimson Ants are so similar to the Terror Ants in behavior, hierarchy, and abilities, they also have two known mutated variants to them:

Unlike the Terror Ant subspecies, these subspecies of Crimson Ants were only used once by the Ravagers during 2025 before both subspecies were discontinued.

Retrieved from "https://aliens.fandom.com/wiki/Crimson_Ant?oldid=166354"
Community content is available under CC-BY-SA unless otherwise noted.