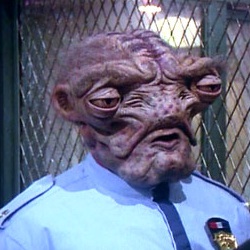 The Creons are a humanoid species who developed an advanced civilization as of the 21st century.

They have brown skin covered in spots, three fingers and a thumb, and two widely placed eyes on a noseless face. They also have red blood. Creons appear to have the same family structures as humans, such as having sisters and grandfathers. An illness known as Creon Fever is highly contageous and deadly to Earth dogs.

At some point in their history they fought in conflicts known as the Thalassic Wars against a race called the Sentrans (mentioned in 'The Power' and seen in 'The Witness'). During the wars the Sentrans used a device called a Sentric mind probe on Creon prisoners to gain vital strategic information. A number of them work for the Demeter City police force on the planet Altor in the Epsilon Eridani system in the year 2040.

Retrieved from "https://aliens.fandom.com/wiki/Creon?oldid=155080"
Community content is available under CC-BY-SA unless otherwise noted.