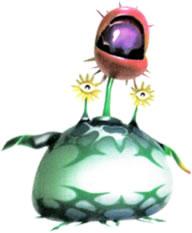 The Creeping Chrysanthemum is a carnivorous form of flora that was discovered during expeditions onto PNF-404.

While dormant, this living plant looks almost exactly like the PNF-404 Margaret - a type of yellow flowering plant that resembles earth dandelions. Its eyes are stalked with yellow petals, and its large red mouth is hidden underneath a third flower while remaining still, it able to be retracted, and petal-like retractable appendages taking its place to resemble another flower.

Like Pikmin, the Creeping Chrysanthemum holds both structural natures to plants and animals, though it seems to only use the "plant" structures as a form of camouflage. Therefore, unlike Pikmin, they don't rely on photosynthesis for food sources as their stems don't possess any green leaves as true Margarets do. They don't have any simple skeletal structure either, so are able to morph their main bodies to shrink and grow to better disguise themselves.

While often considered by many explorers as a form of "mimic" in vain similar to Dwarf Bulborb's mimicry to Bulborb species, considering that it is truly a form of plant within the same Chrysanthemum family group, this title isn't entirely correct.

Placing itself often with its close true plant cousin, the Creeping Chrysanthemum lies in dormancy and waits for prey items to come close as most ambush predators do on PNF-404. In this state, the only visible difference aside from lack of leaves is that the eyes are still visible in the flowers.

Curiously, only Pikmin aren't tricked by the Creeping Chrysanthemum's camouflage, this believing to only be possible as they both have a of a similar heritage.

Retrieved from "https://aliens.fandom.com/wiki/Creeping_Chrysanthemum?oldid=169486"
Community content is available under CC-BY-SA unless otherwise noted.