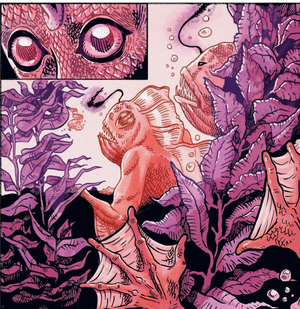 This is an unnamed species of angler fish-like beings.

The species bears the resemblance of evolved angler fish-men. They possess the upper torso of with a pair of arms and the lower torso of an eel. They appear to be benthic dwellers of the ocean.

Boetema's first wanderings as a universal spirit traveler was with an individual named Cree. Soon after Boetema possessed Cree she panicked, unable to comprehend the alien environment and her new form. The two other of Cree's species called out in concern when Cree swam upwards beyond the benthic level of the sea.

Retrieved from "https://aliens.fandom.com/wiki/Cree%27s_Species?oldid=148483"
Community content is available under CC-BY-SA unless otherwise noted.