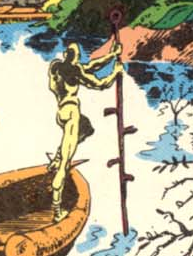 Alien Legion
The Creducians are a species from the planet Creducia.

The Creducians' homeworld was a neutral location between the Tophan Galactic Union and the Harkilon Imperium where the two powers met to negotiate. What was suppose to be a place of peace, quickly devolved into a battlefield after the Harkilons launched several sneak attacks on the Union Regulars. One diplomat was Zeerod a once decorated general who after being saved by a Creducian resigned his commission and joined the Alien Legion to get back in the field as a soldier.

Retrieved from "https://aliens.fandom.com/wiki/Creducian?oldid=159432"
Community content is available under CC-BY-SA unless otherwise noted.