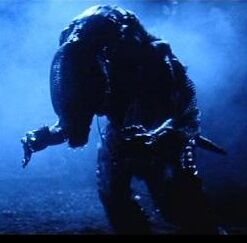 Titan Find
The Creature is an unspecified alien predator.

The creature stands slightly taller than a Human being, its body covered in a highly resilient, dark exoskeleton. Its body structure is vaguely saurian in anatomy: with a reptilian-like head and elongated jaws with a long crocodile-like tail dragging on the ground behind it. Tendrils have also been observed to sprout from its back.

While not known for sure, it is hypothesized that an unknown alien race experimented on the creature over 2000 centuries ago as part of an alien menagerie, and during the time it had been placed inside an alien laboratory hibernation chamber on the Saturn moon Titan. It remained in a state of slumber for the next following centuries, until a pair of Human astronauts wakes it up, and proceeds to kill them both.

Two months after it awoken, it attacks and kills a couple more Humans that had arrived onto Titan, whom it then attaches alien parasites to, turning their corpses into its controlled, zombified minions. It uses them to lure the remaining Humans to it, along with committing sabotage to their ship, but it becomes attached to a detonator. The detonator explodes after it is shot at by one of the astronauts, killing the creature.

Retrieved from "https://aliens.fandom.com/wiki/Creature_(Titan_Find)?oldid=200300"
Community content is available under CC-BY-SA unless otherwise noted.