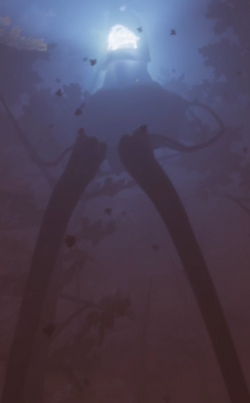 Totem
The Creaker is a large, bipedal entity. While it's unknown as to the full extent of the species, one entity was discovered on planet Earth as early as 1987, it claiming it as its territory with ill respect to the Human race.

The Creaker is a large entity composed of organic-like material infused with mechanical parts: a shark-like head on top of the rounded body with a pair of long, thin legs, each ending in a spear-like foot. It appears to have metallic attachments alongside its main torso, and a horn-like attachment on its throat. According to eyewitnesses, the Creaker appears to lack any form of vision, though it's unclear as to how it's able to sense its surroundings.

Its main form of communication is through forms of trumpeting with its horn, which sounds similar to a distorted horn.

The Creaker entity appears to be easily angered, and described by researchers as "temperamental, and lacks much restraint". While unclear as to the full extent of the species, the entity studied considered Humans as "easy prey", and didn't think very highly of other lifeforms it considers as food. This would suggest a more malicious intent to its actions.