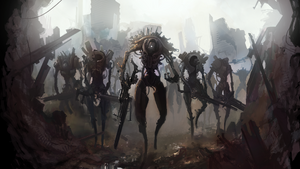 The Cravers are one of the playable factions in Endless Space. Part machine, part-insect, their hive has only one goal: to consume.

The Cravers were created by the Virtual Endless to use as a weapon against the Concrete Endless. They would swarm the enemy and use any available resources to feed the hive, replenishing their numbers and strength.

Before long, the Virtuals realized the threat this new race posed to the galaxy, so they marooned them onto an isolated planet and then bombed the surface in an attempt to eliminate them.

However, the war with the Concrete eliminated the Virtuals before the Virtuals were able to eliminate the Cravers. The insectoid race rebuilt its "civilization" and eventually learned to become a space faring race. The hive, at long last, could begin truly feeding.

Created by the Endless from an insectoid life form, the Cravers are in the purest sense hunter-gatherers who would never have independently evolved the systems and infrastructure needed to raise crops or domesticate animals.

Their life cycle is based on consumption, and as such they are capable of digesting any form of plant or animal matter. As their home world is close to being consumed, they must leave in search of further nourishment.

For if they do not continue to expand, discover, and exploit new worlds, their society will eat itself to death. Feeding the hive is their all-consuming purpose; the notions of 'treaty', 'trade', and 'peace' do not exist.

The Cravers live in a colony, a superorganism. Somewhat like the ants and bees of Earth, they are biologically divided into different subtypes. The lowest ranks are not capable of independent thought: that is reserved for higher subtypes like the "Bishop" level. To a certain degree, the Cravers rely on pheromones to communicate.

Reproduction is accomplished through not one, but multiple queens.

The society has no idea of peace. The concepts of diplomacy, peace, or mercy mean nothing to them. They only know war. The other races are merely prey. Prey that can fight back, but prey nonetheless. As a matter of fact, should the Cravers cease expanding, they will deplete whatever resources they control, and the society might consume itself.

The Queen could be viewed as the leader of the society, but only in the sense that she has the capacity to refuse plans proposed by the Bishops.

She lacks a creative or directive role in the development of those plans, however, and simply passes judgment on them. In fact it is difficult to apply the concept of a political system to the Cravers, as a good two-thirds of their population barely have enough of a sense of individuality to understand the idea of casting a vote.

Though the Queen is the most important single member of the Craver hierarchy, she is not necessarily its leader or decision-maker as her time is spent in the production of future generations.

Though she has an unquestionable right to veto and would be consulted in the case of extreme risk to the hive or a deadlock in the process, her importance is more social than political.

The true leaders of Craver society are a caste known as Bishops; this small percentage of intellectually advanced Cravers forms the backbone of society and is responsible for decisions on construction, warfare, development, reproduction, and exploration.

Retrieved from "https://aliens.fandom.com/wiki/Craver?oldid=126659"
Community content is available under CC-BY-SA unless otherwise noted.