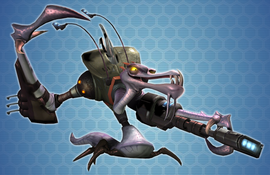 Ratchet and Clank
Cragmites were a militaristic species from the Polaris Galaxy that predominantly formed the Cragmite Empire. They were once defeated by the Lombaxes a long time ago during the Great War. It was though that the "Lombax Secret" was used to completely vaporize them all. In reality, they were sent to another dimension. According to the IRIS Supercomputer, they were moved to the dimension of X2-49, a dying star approximately 8.2 million kilocubits from any life form, their status: angry and bored.
Retrieved from "https://aliens.fandom.com/wiki/Cragmite?oldid=187059"
Community content is available under CC-BY-SA unless otherwise noted.