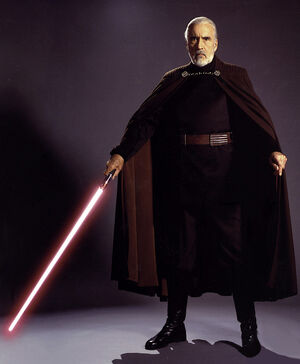 Leader of the Confederacy of Independent Systems

Count Dooku, a.k.a. Darth Tyrannus, was the second apprentice of Darth Sidious, the leader of the separatist forces during the Clone Wars and a former member turned bitter enemy of the Jedi Council.

Born on the planet Serenno, Dooku was strongly Force-sensitive and was trained as a Jedi Knight by the legendary Master Yoda. However, he turned to the dark side after the death of his apprentice, Qui-Gon Jinn.

As the leader of the Confederacy of Independent Systems, Dooku led the separatist forces in the first acts of war against the Galactic Republic; eventually leading to the Clone Wars. At the same time, he also became the second apprentice of Darth Sidious (following the supposed death of Darth Maul) and received the Sith name Darth Tyrannus.

He was ultimately killed by Sidious' third apprentice, Anakin Skywalker, who would become known as Darth Vader.

Retrieved from "https://aliens.fandom.com/wiki/Count_Dooku?oldid=168965"
Community content is available under CC-BY-SA unless otherwise noted.