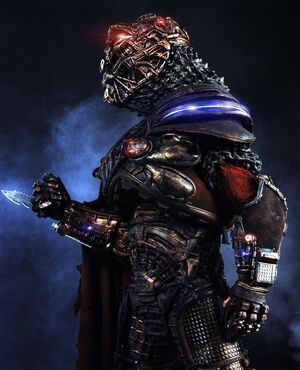 Coreeshi are a technologically advanced species of sapient bipeds.

Very little is known about their true form other than that their blood runs redish orange (when exposed to air which they breath presumably) and inside their exoskeletal armour they stand a little over 2 metres tall.

They also posses great strength as one easily over powerd Scorpious with one arm.

Little is known of their culture, only that the PeaceKeeper Corps hired Coreeshi bounty hunters to hunt the Leviathan Moya and her crew.

The Coreeshi are highly advanced possessing technology that enables them to shrink objects to a more manageble size, for example an average sized man could be shrunk down to a similar size to a mouse. They also incorporate advanced energy weapons into their suits.

Thier suits appear to be biomechanical and are resistant to multiple shots from heavy weapons, although they can be killed if enough shots are fired.

Retrieved from "https://aliens.fandom.com/wiki/Coreeshi?oldid=178147"
Community content is available under CC-BY-SA unless otherwise noted.