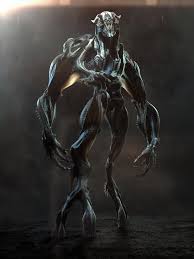 This Alien Race has an humanoid/spider look , little is known about them or their home planet but are said to be subterranean, with six limbs and have second eyelids that covers their real ones , which appear similar to human eyes .

These creatures are also known to be more intelligent then humans and use cubes to build their ships telepathically with their minds.

They may even be nocturnal, since Cooper; who is a member of this species, was never seen during the daytime and only around at night.

Retrieved from "https://aliens.fandom.com/wiki/Cooper%27s_Species?oldid=181301"
Community content is available under CC-BY-SA unless otherwise noted.