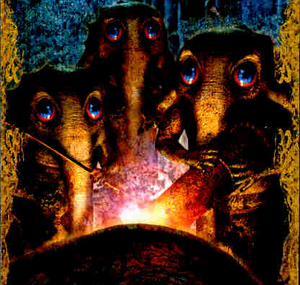 The Coo-Hatch are a race of extraterrestrials that came to Everworld against their will.

They have large red eyes with blue pupils, two main arms as well as two smaller arms that have more dexterity and are on the sides of their faces. Their mouths are long and tapered. Juvenile Coo-Hatch are small and flighted with needle-like mouths. The juveniles are very fast fliers, covering a space of 20 feet in the length of a human blink.

The Coo-Hatch are an alien race whose gods brought them to Everworld against their will around a hundred years ago before the start of the Everworld series. Since then the Coo-Hatch have abandoned their deities searching for a way back to their universe.

They often ally themselves with whomever they believe can achieve this goal. The Coo-Hatch then aided the Hetwans in almost taking over Mt. Olympus.

It was revealed the Coo-Hatch had no ambition to conquer Everworld, only wishing to attract the attentions of the Great Gods of Everworld, and demand they send them home lest they sell their new weapons to Ka Anor's spawn. However they were disappointed to learn that not even the Great Gods could send them home. To prevent war, an alternative was proposed to seek out another Gateway in the form of Senna's mother.

In exchange for their return home, some of the tribes of the Coo-Hatch teamed up with the protagonists and developed cannons to use in an assault on the Hetwans in the coming battle for Everworld.

The Coo-Hatch are master metal forgers and can create blades sharp enough to cut through any known material; they use this skill to make small, accurate throwing blades and metal tools. According to them the God of the Flame and Goddess of the Ore were the ones who taught them their craft.

Their one true desire is to go back to their forges on their home world, which they cannot do without a gateway like Senna or her mother. According to them their were about seven tribes of Coo-Hatch wandering Everworld.

Retrieved from "https://aliens.fandom.com/wiki/Coo-Hatch?oldid=181732"
Community content is available under CC-BY-SA unless otherwise noted.