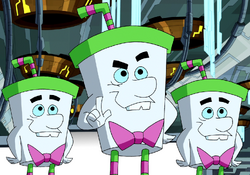 Ben 10
The Contemelia were a neutral 5th-dimensional race that traveled across the multiverse using a device called the Anihilaarg to create and destroy universes as experiments.

Due to having a 5th-dimensional body, a Contemelia's true forms cannot be perceived by three-dimensional beings. Instead, they are seen as an animate projection of what holds the most emotional sway over those who see them.

At some point in time, the Contemelia died off. At least one of their vessels still flew across the multiverse, passing into legends along with its tool/weapon.

Over time, many species started to predict the Contemelia as interdimensional beings who played practical jokes on the inhabitants of the universes they would visit. If the Contemelia did not like a particular universe, they would use the Anihilaarg to reduce it to nothingness.

Retrieved from "https://aliens.fandom.com/wiki/Contemelia?oldid=184212"
Community content is available under CC-BY-SA unless otherwise noted.